Chakra - a wheel or a moving circle of energy. There are seven major chakras & minors ones located in the back of your head, hands & feet.
Chakras are important in ayurvedic healing, particularly relative to the prana & mind, which works througt them. To awaken chakras requires an immence amount of energy, for which kundalini comes into use. The chakra can only be truly opened through inner practices of pranayama, mantra & meditation.
The chakras are energetic & functional centers, not physical positions. The chakras are part of much higher energy system than the physical body.
When the chakras are opened we experience the cosmic nature of these factors as part of our own deepre awareness. We learn the secreats of creation & merge the universe into our own minds. 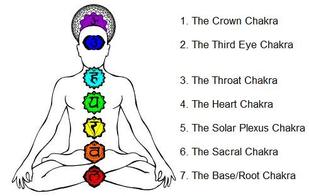 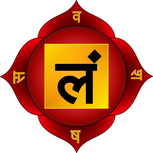 muladhara - base or root chakra (ovaries/prostate) - is represented as a yellow square, with 4 red petals. the seed syllable is Lam, the deity is Ganesh, and the Shakti is Dakini. The associated animal is the elephant Ganesha. This chakra is where the 3 channels are merged, then separate and begin their upward movement. Inside of this chakra is wrapped up the goddess kundalini three times around a black lingam. It is the seat of the red bindu, the female drop (which in Tibetan vajrayana is located at the navel chakra). Muladhara is related to instinct, security, survival and also to basic human potentiality. This center is located in the perineum, which is the region between the genital and the anus. Although no endocrine organ is placed here, it is said to relate to the gonads & the adrenal medulla, responsible for the flight-or-flight response when survival is under threat.
Muladhara is symbolized by a lotus with four petals and the colour red. Key issues involve sexuality, lust and obsession. Physically, Muladhara governs sexuality, mentally it governs stability, emotionally it governs sensuality, and spiritually it governs a sense of security. 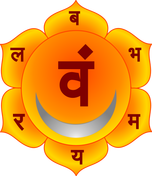 svadisthana or adhishthana is symbolized by a white lotus within which is a crescent moon, with six vermillion, or orange petals. the seed mantra is Vam, and the presiding deity is Bramha, with the Shakti being Rakini ( or Chakini). The animal associated is the crocodile of varuna. The sacral chakra is located in the sacrum & is considered to correspond to the testes or the ovaries that produce the various sex hormones involved in the reproductive cycle.
Swadisthana is also considered to be related to, more generally, the genitourinary system & the adrenals. The key issues involving swadisthana are relationships, violence, addictions, basic emotional needs, and pleasure. physically, swadisthana governs reproduction, mentally it governs creativity, emotionally it governs joy, and spiritually it governs enthusiasm. 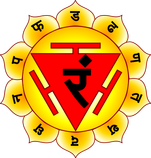 manipura - is symbolised by a downward pointing triangle with ten petals. the seed syllable is Ram, and the presiding deity is Braddha Rudra, with Lakini as the Shakti. Manipura is related to the metabolic and digestive systems. Manipura is believed to correspond to islets of langerhans, which are groups of cells in the pancreas, as well as the outer adrenal glands & the adrenal cortex. These play a valuable role in digestion, the conversion of food matter into energy for the body. The colour that corresponds to manipura is yellow. Key issues governed by manipura are issues of personal power, fear, anxiety, opinion-formation, introversion, and transition from simple or base emotions to complex. Physically, manipura governs digestion, mentally it governs personal power, emotionally it governs expansiveness, & spiritually, all matters of growth. 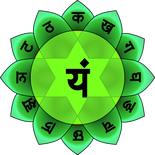 or Anahata-puri, or padma-sundara is symbolised by a circular flower with twelve vermillion, or green petals. Within it is a yantra of 2 intersecting triangles, forming a star of David, symbolising a union of the male and female. the seed mantra is Yam, the presiding deity is Ishana Rudra Shiva, and the Shakti is Kakini.
Anahata is related to the thymus, located in the chest. The thymus is an element of the immune system as well as being part of the endocrine system. It is the site of maturation of the cells responsible for fending off disease and may be adversely affected by stress. Anahata is related to the colours green or pink. Key issues involving anahata involve complex emotions, compassion, tenderness, unconditional love, equilibrium, rejection & well-being. Physically anahata governs circulation, emotionally it governs unconditional love for the self and others, mentally it governs passion, and spiritually it governs devotion. 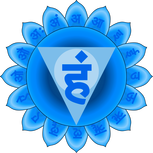 also Vishuddhi - is depicted as a silver crescent within a white circle, with 16 light or pale blue, or turquoise petals. The seed mantra is Ham, & the residing deity is Panchavaktra shiva, with 5 heads & 4 arms, & the Shakti is Shakini. Vishuddha may be understood as relating to communication & growth through expression. This chakra is paralleled to the thyroid, a gland that is also in the throat and which produces thyroid hormone, responsible for growth and maturation. Physically, vishuddha governs communication, emotionally it governs independence, mentally it governs fluent thought, & spiritually, it governs a sense of security.

ajna is symbolised by a lotus with two petals, & corresponds to the colors violet, indigo or deep blue. It is at this point that the 2 side nadis ida & pingala are said to terminate & merge with the central channel sushumna, signifying the end of duality. The seed syllable for this chakra is the syllable OM, and the presiding deity is ardhanarishvara,  who is a half male, half female Shiva/Shakti. The Shakti goddess of ajna is called Hakini.
Ajna (along with bindu), is known as the third eye chakra is linked to the pineal gland which may inform a model of its envisioning. The pineal gland is a light sensitive gland that produces the hormone melatonin which regulates sleep & waking up. Ajna's key issues involve balancing the higher & lower selves &  trusting inner guidance. Ajna's inner aspect relates to the access of intuition. Mentally, ajna deals with visual consciousness. Emotionally, ajna deals with clarity on an intuitive level. 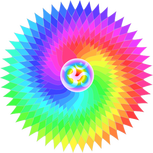 sahasrara - which means 1000 petalled lotus, is generally considered to be the chakra of pure consciousness, within which there is neither object nor subject. When the female kundalini Shakti energy rises to this point, it unites with the male Shiva energy, and a state of liberating samadhi is attained. Symbolized by a lotus with one thousand multi-coloured petals, it is located either at the crown of the head, or above the crown of the head. Sahasrara is represented by the colour white and it involves such issues as inner wisdom & the death of the body. Its role may be envisioned somewhat similarly to that of the pituitary gland, which secretes hormones to communicate to the rest of the endocrine system & also connects to the central nervous system via the hypothalamus. The thalamus is thought to have a key role in the physical basis of counsciousness and is the 'bridal chamber' mentioned in the gnostic scriptures. Sahasrara's inner aspect deals with the release of karma, physical action with meditation, mental action with universal consciousness & unity, & emotional action with "beingness".
Free Advertising